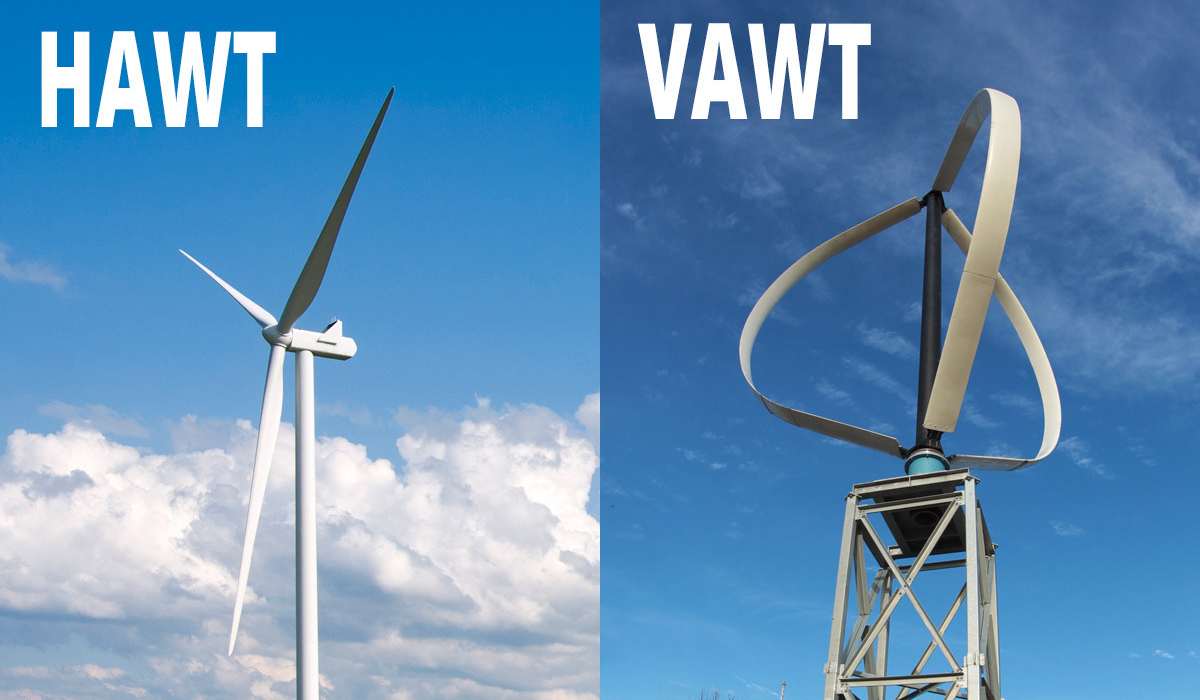 Most conventional wind turbines are horizontal axis wind turbines (HAWT), meaning they look more like traditional windmills.  A HAWT  generates electricity by turning its large blades to the wind and as they spin, a generator produces power. Over the years, engineers identified a number of design limitations with Horizontal Axis Wind Turbines that have been costly and problematic - e.g. the need for complex yaw mechanisms to direct the turbine into the wind.

The modern Vertical Axis Wind Turbine (VAWT) has significant engineering design differences from the HAWT, but its look is also quite different. A VAWT often looks like a giant egg-beater pointed toward the sky, although there are many variations on the VAWT design.

Vertical Axis Wind Turbines were developed to address and remedy  the cost and efficiency limitations inherent in the  HAWT design. VAWTs catch the prevailing wind regardless of direction (or changes in direction) and therefore do not need to be moved when the wind direction changes.

HAWTs have complex gearboxes that must be located on the top of 300-foot towers making them harder, more dangerous, and more expensive for technicians to service them. On the other hand, the VAWT gearbox can be located near the ground or surface of the water where they can be more easily and safely serviced by technicians. VAWTs have a lower center of gravity, which provides greater stability and less torquing - especially when facing strong gusts of wind. New VAWT designs have improved on the early VAWT problems of oscillation that previously caused failure.

VAWTs are easier on the environment

VAWTs are popular among conservationists for a few reasons. Due to their more economical and efficient design, they are easier and less expensive to manufacture - even at utility-scale. They also require fewer parts and less maintenance. This means the VAWT long-term maintenance and replacement costs are a fraction of those of horizontal axis wind turbines.

VAWTs can also be easily scaled-up for greater energy efficiency, and can also be stacked more compactly side-by-side than conventional wind turbines to create a microgrid. Their ability to produce energy under wind conditions HAWTs can’t mean they work well in combination with HAWTs, as well as with other types of alternative energy technologies like solar and water.

Finally, VAWTs large size, slower rotation, consistent blade speed, and lower profile allow birds to spot and avoid them from far away, unlike conventional HAWTs, which are positioned higher in the normal migratory path of birds. HAWT blades also spin so fast the blades sometimes appear to vanish in the air, allowing them to take birds by surprise. VAWTs are safer and more enjoyable for humans to be around as well. They do not need to be placed on high towers and are also quieter in operation. 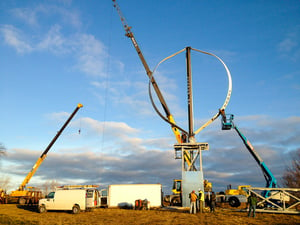 HAWTs can take weeks and months to assemble because they have many more complex parts. VAWTs on the other hand are scalable - up or down. Even though the larger-sized VAWTs can be incredibly large, once they are delivered to their location, they can be set up in a single day with a few technicians and a crane. Once set-up, these VAWTs have unparalleled energy production, efficiency, and long-term durability.

VAWTs and HAWTs have different niches to fill. The VAWT is a welcome addition to alternative power generation and provides more possibilities for distributed power generation. VAWTs can provide power to farms, small industrial complexes, communities, urban and rural areas were power from the grid is either expensive and/or sometimes difficult to access.

Based in Ann Arbor, Michigan where it leverages Michigan- and U.S-based suppliers, the ArborWind team works with a single vision: Clean, safe and reliable wind power delivered with a durable, economical product, the ArborWind PT180 Vertical Axis Wind Turbine. Contact us to us learn more at 734-688-8040.

Dilip Nigam is a successful entrepreneur who has focused on innovation for over 35 years. In 1985, Dilip founded the computer-aided engineering consulting service company ADSC. The award-winning company provides consulting services to the automotive industry. Over the course of his career, Dilip has supervised over 600 engineering design/analysis projects and assisted in office-development in the United States and India. After founding ArborWind, Dilip and his team saw early success with a Great Lakes Entrepreneur’s Quest award in 2010 and The IndUS Entrepreneurs (TiE) award in 2011. Dilip has a Bachelor of Science degree in Mechanical Engineering from the University of Michigan and has been a registered Professional Engineer in Michigan since 1986.